“How long will my case take to get to trial?” This is one of the first questions asked when contemplating or responding to litigation, and the answer is critical to many strategic decisions during the course of litigation, such as:

Yet, the answer is not always straightforward. Different types of cases progress at different paces and there may be significant variance in schedules among different judges. There are also important differences in how external factors, such as natural disasters, pandemic-driven court closures, or shifts in case filings prompted by landmark changes in the law, impact different courts and judges.

Docket Navigator’s new Time to Trial tool lets you slice and dice the data to focus on cases and circumstances most closely resembling yours. Here are a few examples:

To learn more about how the new PTAB guidance affects trial timelines, keep reading the article recently published by our partner, IAM.

The Time to Trial tool is accessed through the main search page in the Analytics section.

Docket Navigator keeps detailed statistics on time-to-trial in the US’s busiest patent courts and we took a look to compare them to the PTAB’s timelines for deciding inter partes reviews.

The board’s Fintiv precedent calls on the board to issue a discretionary denial of an IPR with parallel district court litigation in which the judge has scheduled a trial prior to the board’s deadline to decide the review. The provision has been criticised by some in the patent community, as well as in Congress, They take issue with the board’s over-reliance on district court timetables which often get delayed, with trials happening much later than the PTAB could have decided an IPR.

The America Invents Act, which created post-grant reviews, laid out timeframes for the PTAB to meet milestones in cases. The board must decide within six months of filing a petition whether it will institute a review. Upon institution, a panel of administrative law judges has 12 months to issue a final written decision. All told, an IPR should take 18 months from start to finish.

Average time-to-trial is getting longer

It’s worth pointing out that the covid pandemic paused jury trials and led to a backlog of cases. Most of the country’s busiest patent courts slowed their average pace of holding jury trials – and some, like the District of New Jersey and Southern District of New York, had none in 2020 or 2021. 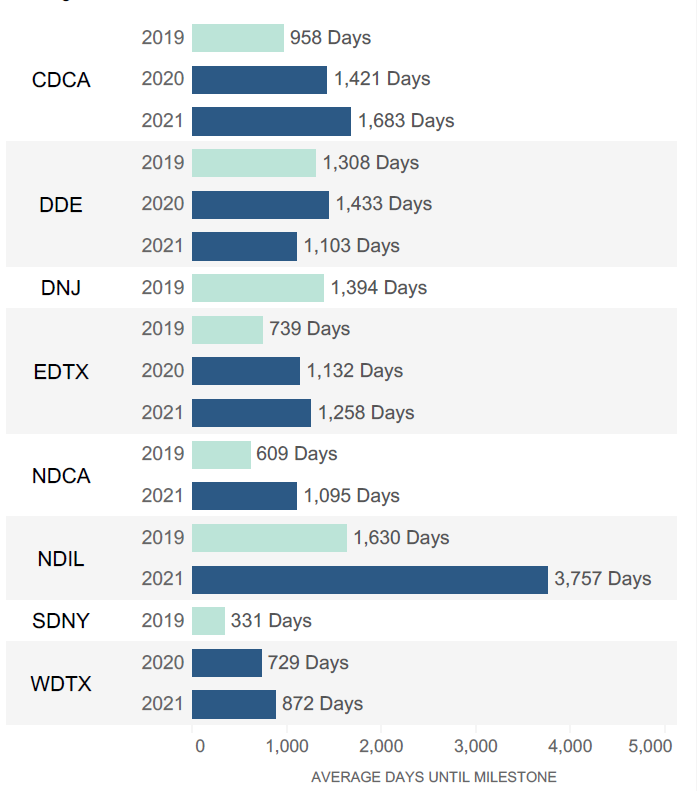 Likewise, bench trials were delayed because of the pandemic. The average time to reach a bench trial rose in nearly all the top patent courts. 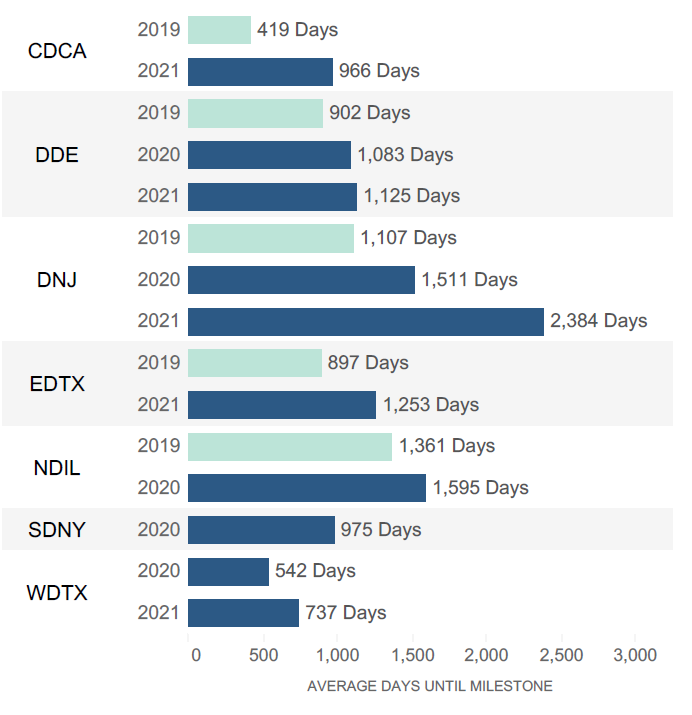 Average time-to-trial metrics are not what Vidal instructed PTAB judges to consider when weighing a Fintiv discretionary denial. Rather, she instructed the board to use median time-to-trial statistics.

Here is a look at that metric in each of the country’s top eight patent courts.

There are plenty of patent plaintiffs who seek to file suit in the Western District of Texas, where US District Judge Alan Albright’s speedy trial schedule offers a chance to advance to a trial sooner than in many other courts.

But the median time-to-trial metrics in the Western District of Texas – 24.2 months for a jury trial and 23.9 months for a bench trial – will not beat the PTAB’s 18-month deadline to enter a final written decision.

Here is a detailed look at all of Docket Navigator’s time-to-trial statistics for the top three US patent courts.

The Western District of Texas has only 20 jury trials recorded in Docket Navigator’s system and its median time-to-trial takes about two years.

It takes about eight months longer on median for a case to reach a trial in the District of Delaware, which is the country’s second-busiest patent court with 22% of the caseload.

Compared with the other two, the Eastern District of Texas has held the largest number of jury trials. It also has the shortest median time-to-trial number for these, while it is on par with Delaware for the time to bench trials.